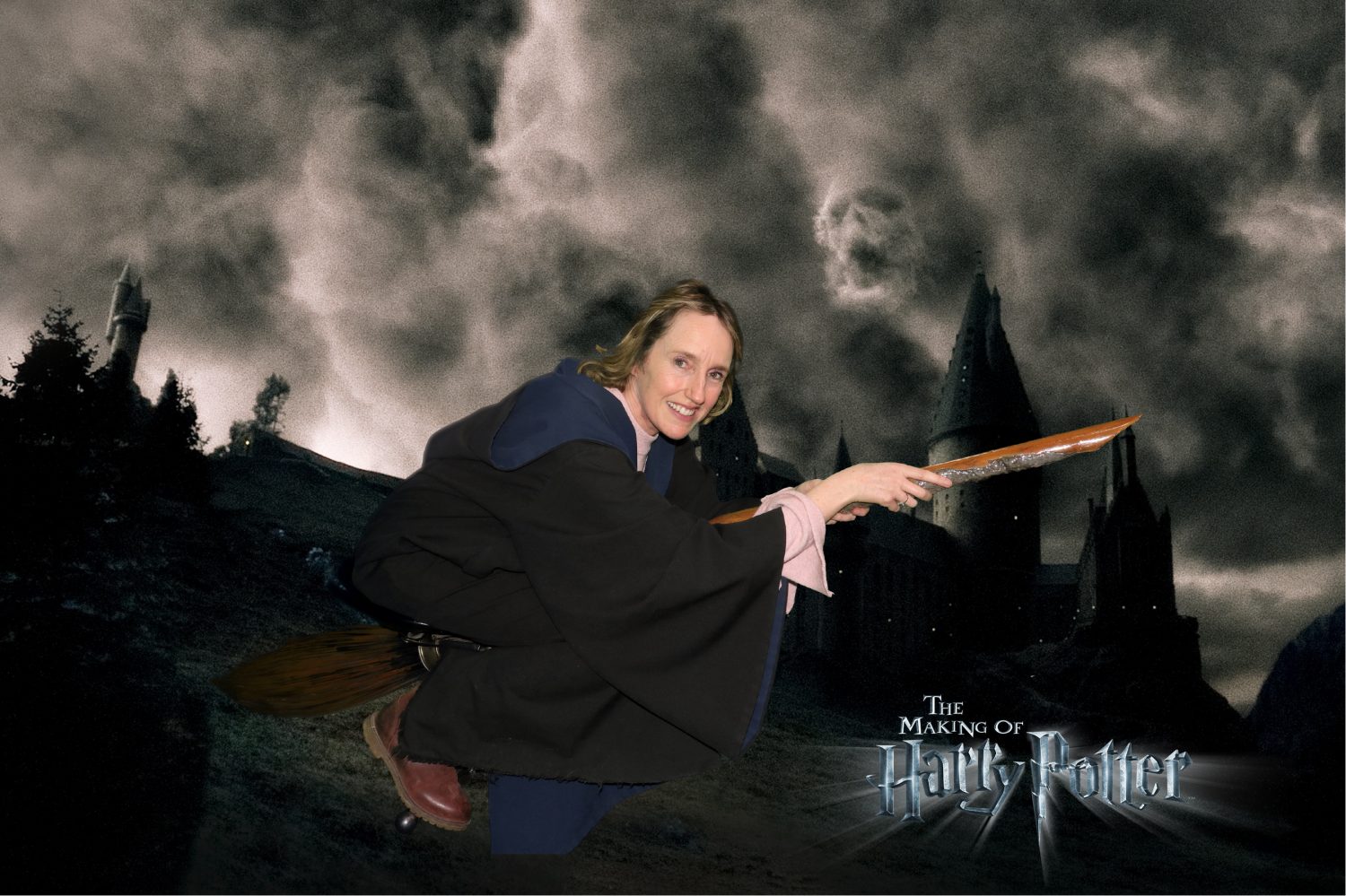 I’d wanted to go to The Harry Potter Studios in London for ages and even though. I’d seen photos I couldn’t imagine exactly what I’d do there. What would I see? So for those of you who are thinking of visiting The Harry Potter studios, this is how it was for me.

I stayed the night in London before hand and I’m glad I did. It meant I was rested and ready for a long day of walking, standing, queuing and gaping. Yes, there is a lot of queuing but even that is fun because there is always something interesting to look at: people flying on broomsticks against a green screen being told to wave their arms and act like eejits – they did and so did I. Meanwhile those in the queue watch the movie screen of where the eejit is actually flying – through the streets of London, sweeping low over Lochs in Scotland, ( you are instructed to reach down and touch the water for that part).
There is so much to see. I went on my own and thought I might miss having someone to “ooh” and “ah” with but I was too busy gaping at the sets, the creatures, and trying everything out. It was the first time I’d ever been in a television or film studio. It was amazing how much trouble they went to – all the tiny details. Many things we don’t even seen in the films but they were there to help the young actors believe they really were in Hogwarts such as club and society posters in the Gryffindor Common room.

I did everything going. I got to try out my acting skills, not only on a broomstick but on the Hogwarts express as well. When I was sitting in a carriage, an invisible director told when to act scared (see photo below) and when to act surprised – there was chocolate frog on the Windows. There was a queue of people watching me, but I didn’t care and I felt I did a brilliant job myself. I was also taught how to cast spells by a recorded lesson from the choreographer of the battle scenes. The assistant on hand was convinced I born witch!

According to the website the average time is 3.5 hours. I spent over five hours there. Luckily I wasn’t in any rush to catch a plane as I’d booked a local hotel for the second night. I’d really recommend a hot bath and a early to bed after the day there. The staff were incredibly kind and helpful. It felt a like visiting Wille Wonka’s Chocolate Factory. The staff know how magical and important the experience is for every visitor. You’d never guess that they do the same thing every day. Children dressed in their gowns are treated as particular V.I.Ps

You can bring your own food if you wish. You can eat it in the cafe area where there are self-service salads, curries, burgers etc. I had a smoked salmon salad with quinoa that revived me to carry on for the second half of the tour. Apart for the first twenty minutes, there are no guides so you can go at your own pace. Some people had audio guides but I didn’t bother as I don’t usually like them in art galleries. There are so many movies running with crew members giving insights into costumes, sets and special effects. That I really didn’t miss it.
The highlights for me were the Hippograff – it actually looks like a animal (they hand inserted every feather) – Diaggon Alley and the Gryffindor common room.

If taking the train from Euston station make sure to get the fast train to the studios. It takes about twenty minutes ( apparently). I took the slow one which took about twice that amount of time.

Bring a bottle of water, if you don’t fancy paying two pound sterling for a small one.

Stay the night either side of the tour so that you’ve loads of energy and don’t have to leave early for plane.

Only bring food that you are happy to carry with you for the duration of the tour, as for some unknown reason they won’t hold food items for you in the cloakroom.